Kevin Beasely, an East Baltimore native, is a lifelong mentor and is co-founder of Baltimore Cease Fire, a grassroots movement born from the ideology that violence will only end when the people impacted by it take a stand.

Decades before Beasely’s thought about Cease Fire or being a mentor, he attended the Baltimore Rites of Passage program back in the 90s- an African-centered  program targeting at-risk youth, “Me and my friends would go there just to get away and have fun,” Beasley remembered, “but it was a serious African-centered program, that’s what changed my approach and thinking when it came to mentorship and how serious it was.”  The dedication of the adults in that program motivates Beasley in his approach to mentoring young Baltimoreans in the Beats Not Bullets program.

Beasley himself is a victim of violence. Years ago on Father’s day, he was shot after making harmless  jokes. Although he suffered non-life threatening injuries, he knew he needed to do something to save others from having a similar experience. His first step was Ceasefire. The concept came to him while conducting classes in a local housing unit for persons convicted of crimes.  A detained person told him the detainees  ‘came up with’ no stabbing periods. These periods would vary from as short as a weekend to an entire week. As a younger man, Beasely also remembered news anchors discussing ‘cease fires’ in the Middle East, “That was the only time that I really would care, it sounds kind of bad right?” Beasely recounted, “I just remember when they would call a ceasefire, I would go look to see what happened.” An effect Beasely wanted in Baltimore, especially at a time when it seemed like too many were becoming desensitized to the murders of Black people. Now ceasefire seeks to add more to its brand including employment and mentorship programs. 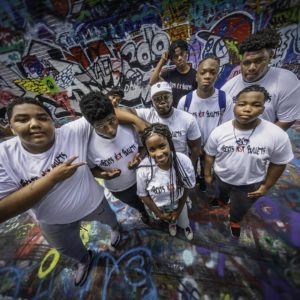 Among Beasley’s strategies, he now uses the power of music to stop violence among Baltimore’s youth through the program Beats Not Bullets. With a targeted audience of High School students, Beats Not Bullets is unique in its approach and methodology to cure violence. The program teaches young people song writing, music production, beat making,  music engineering, and soft skills with the hopes that youth can reimagine their future.

Though some may question how learning music addresses violence, Beasley himself says he “used to be” an artist and has seen people come from the bottom to the “glass ceiling.” Including drug dealers who changed their life because music gave them a bigger dream.  “I’ve seen people who were known for altercations, known to always stay with a pistol, and rap or being attached to someone trying to make it in rap and that gave them a little more motivation to kind of leave those bad habits to the side.”

After operating for a few years, the program has over a 90% retention rate, even inviting past members back as mentors for new participants.

According to local news station, WBAL, youth violence in Baltimore is on the rise. However, Kevin Beasely is undeterred from his mission. “Imagine if we didn’t have music, music is that universal language that we all love, when it comes to the youth, it’s probably the safest thing to get us on the same page.”  That is exactly what happens when young people enter the program. “On the first day the guys are sizing everybody up, and they’re usually not used to coming into an environment that’s safe, creative, you giving them a space to be themselves.” Beasely believes that violence can be corrected before it even happens and we should care about the lives that are here, not just care when life is lost, “If we didn’t create that environment and let that tension brew, somebody would probably fight on the first day.”

Beats Not Bullets is not advertised in schools as a mentoring program. According to Kevin Beasely, they introduce the kids to music and ease into the case management of the program, “we hide mentorship behind the music.” Beasely has seen what he describes as “the toughest of kids” come into the program and leave with a positive attitude toward life.  They also leave with new skills and a pathway to create art, not chaos. “There could be a little bit of tension in any interaction…Beats Not Bullets will be an example of youth coming together,” said Beasely.