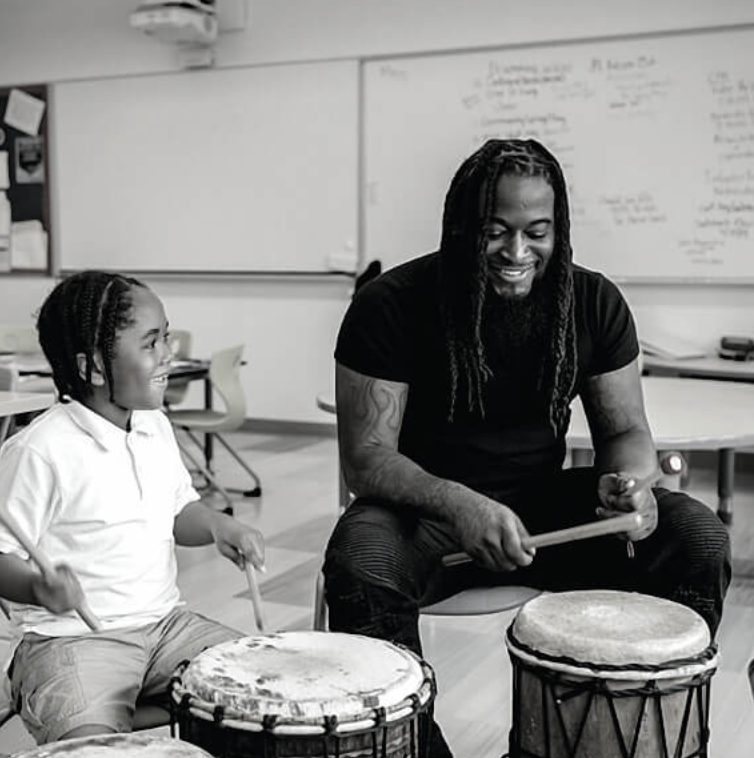 On an August summer afternoon, West Baltimore’s Druid Hill park was transformed into a euphony of harmony, drum beats, and rhythmic community during the culminating event for Creative Nomad’s Drumming With Dad program.

A circle, furnished with drums, djembes, maracas and family shared stories that painted pictures of strengthened  family bonds, fellowship, and a community forged from beating out rhythms on a drum. Many of whom were Dads directly impacted by the program. One such Dad, named Thomas Cudjoe, stood bold in the circle, his towering presence demanded the attention of children and adults alike. He praised the program for making him “a better father” to his children, Cudjoe exclaimed, “Drumming with Dads’ has given me the space and opportunity to spend dedicated time with other fathers, and spending quality time with my children.” This sentiment was echoed by other fathers in attendance who nodded in solidarity with Mr. Cudjoe.

Program founder, Kayenesha Daugherty had no idea a dancer cancelling on her a few years ago would grow into a community of men who use one of the oldest musical instruments in history as an avenue to strengthen bonds with both their children and other fathers. Ms. Daugherty described how the program came to fruition as Dads’ played the drums in the background as if they were playing their life stories. she explained that Creative Nomad’s organizational partners, namely, the Judy Center wanted more Dad centric programming, A call Ms. Daugherty sought to answer,  “One day we had an African dance class, and the dancer was not able to make it, so we had Baba Changa do the drums with the kids…..the energy was so different when it was a man and drums, I saw the energy and I was like dang, what would happen if their Dads were actually participating.” After the program officially launched, Ms. Daugherty’s inquiry was answered. She observed children, who were able to catch on quickly to the drumming, teach their Dads who would sometimes lose patience and become dependent on the expertise of their children. “The program showed children that their parents don’t know everything and that their fathers are actually human, and seeing the fathers’ learn with their kids, and we could see the dads and children communicate more.” For Ms. Daugherty Community voice is important, people wanted to engage Dads and the concept of drumming tied into Creative Nomad’s mission of creating greater access to art.

Sadiq Ali, a Dad who participated in Drumming With Dad, also spoke of the impact of the program after spending the summer of 2021 participating with his two sons, “Too many times, the best of what makes us people of color, particularly people of African descent is not lifted up, it’s not shared, it’s not heralded, it is not lauded” Sadiq Smiled at the drummers, popped the collar of his snazzy Black polo complete with a matching black snapback hat as he pivoted to the importance of the culture embraced and taught in the program, “ Culture, culture, culture, if we don’t teach culture early to our young people, our kids, they will not learn to value it, they certainly will not duplicate it in the future.”

An idea echoed by Ms. Daugherty who even supplied participants with soul food, the cuisine most symbolic with African American culture. Ali reiterated his appreciation for the culture Drumming with Dad brought to his children, “To let them know that our culture as people of African descent has many many beautiful aspects, we got to practice those [aspects] weekly during Drumming with Dad.”